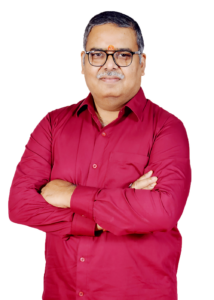 Dr. Anup Nath since his childhood is a follower of Maa Gayatri  Shri J.P. Nath is his first Guru in the field of Yoga and spiritualism who is also his father.  Due to spiritual wonders in his life and with the blessings from several other gurus from time to time in his life span, he realized the spiritual powers of Maa Gayatri.

He received proper Yoga training in Vishwayatan Yogasharam in the year 1982 with his father and also under the guidance of Swami Dhirender Bharamchari Ji.  Over the period of time he got hold of the yog asanas (Yoga Postures) and became proficient in this art.

Yoga championship at the zonal level stepped up the milestone in his career as he topped in the championship.  He represented Delhi at the All – India level and made his State proud.

During practice of yoga postures, he realized the effect of Yogasanas and Yogkriyas in the body which made his interest for understanding human anatomy and human physiology.

Under the banner of Maharishi Dayanand Yogasharam Society, a World Yoga Conference was organized in which Dr. Nath represented India.  With the knowledge and experience of yoga, he was awarded Yoga-Ratan by the President of India.  At the age of 15, he became a renowned figure in the field of yoga in India and worldwide.

His objective for life was to serve the humanity at his best and not to become a stage celebrity only.  He realized that this is the right time to start different types of therapies to heal the agonies of human beings and to gain proficiency in integrated system of medicines.

He wanted to learn about all types of therapies which included Naturopathy, Yoga, Allopathy, Homeopathy, Acupuncture, Acupressure, etc.  His aim was to treat people physically, mentally, emotionally, socially as well as spiritually by the combination of different pathies with the help of astrology and spiritualism.  For attaining this goal, he learnt the various systems of medicine and also learnt various facets of astrology.

After clearing 12th standard examination in the year 1987, he couldn’t get admission in the M.B.B.S. Course in that session but he was not disappointed by that and continued to put his efforts in the same line.  He took admission in pharmacy course in that year to understand about the modern drugs.  Fortunately by the blessings of Goddess Aadheyashakti, he got the admission in B.D.S. course (Bachelor in Dental Surgery) in the same year.  He didn’t disclose to anybody that he has joined both the courses.  Due to short of attendance in pharmacy course, he was uncertain whether he will qualify for taking examination or not even.  At that moment he met the disciple of Durga, Churiwala Baba who later on became one of his Guru.  By the blessings and encouragement of Baba, he not only succeeded the examination but also topped in two subjects of pharmacy course and also did well in B.D.S. course.  Further, he even got the admission in M.B.B.S. next year.  He believed that this has happened only due to Goddess Aadheyashakti.  These incidents increased his devotion towards the Goddess even more.

After studying for two years for M.B.B.S. his interest for astrology and tantra developed.  He got inspired from his Guru that this is the right time to study other medicine therapies.  Then he joined British Institute of Homeopathy (U.K.) and learnt about Homeopathy under the guidance of Dr. Radha Madhuri and cleared the examination with 93% marks.  He was presented an award for this by William Tankard Hahnemann who is the grand son of the Samuel Hahnemann (founder of Homeopathy).

Due to his keen interest in holistic health along with homeopathy, he acquired Diploma in Naturopathy and Diploma in Yoga in February 1995-96 by the International Federation of Natural Health and Yoga Institute. He has even served as an Associate Member of Federation of Practitioners of Natural Therapies in the years 1995, 1996 and 1997.

For the promotion of holistic health, he worked as a lecturer of Naturopathy, Yoga on honorary basis in Ghandhi Smarak Nidhi College, Delhi University and Daulatram Naturecare Hospital for more than four years.

In February 1995, peptic ulcer was diagnosed in him and for the treatment of this his father took him to an acupuncture clinic of Dr. Tuli at New Friends Colony, Delhi.  But instead of spending the money on the treatment he spent the money to learn the acupuncture therapy.  Then under the guidance of Dr. O.P. Chabra he gained proficiency in the healing art of acupuncture also.

Along with the learning of different healing arts he continued his studies as modern medicine graduate.

From September 1998 he served as Honorary Medical Officer Incharge in International Foundation of Natural Health and Yoga for two years.

In 1999 he was appointed as Resident Medical Officer in GTB Hospital, Delhi and started utilizing his knowledge of modern medicine in a Government set up.

In September, 2000 he learned Reiki healing art from Reiki Healing Trust in Delhi.

He also received the training of acupressure from Jai Bhagwan Acupressure Service (International) Mumbai under the guidance of Shri Vipinbhai Shah.

Besides providing services to the hospital, he even attended several pilgrims in which Ajmer Shariff Urs Camp is one of them.  He was appointed as an incharge of the medical camp there and was honoured by the Chairman of the Urs Committee also.

On 31st October, 2002, he was appointed as Medical Specialist in Department of Medicine in Dr. Hedgewar Arogya Sansthan which is a Government hospital under Secretariat of Health and Family Welfare Department.  It was the first time when he got an opportunity in a Government setup to develop integrated system of medicines and promotion of holistic health.  Along with his duty hours, he was given additional charge of Department of ISM (Ayurveda) and homeopathy.  During this time he was running an additional OPD in morning hours in which he was teaching yoga and treating the patients holistically.  Despite of his very long working hours at the hospital, he continued his OPD in the morning hours for yoga and curing his patients with the help of integrated system of medicines.

In October 2002 he submitted his research proposal for the first time in the Department of ISM & Homeopathy in Government of India and then to the Directorate of Health Services under the State Government but he didn’t get any positive response from either side.

Due to the growing popularity and respect of Dr. Nath at Hedgewar Arogya Sansthan, his seniors and bureaucrats become envious of him and interferred with his work day by day.  Then Dr. Nath decided to leave that place.

These incidents inspired him to establish his own setup for the promotion of health systems in the society and he laid the foundation stone of “Aadhyeshakti Holistic Health, Care & Research Centre” which later on become a unit of “Maa Aadhyeshakti Holistic Health & Care Foundation”.  At this time his determination to treat the physical, mental and spiritual agonies of the people holistically became stronger.

To benefit the people all over the world, Dr. Nath visited Australia in October, 2005.  During this period he met several people from different countries and helped them by showing the correct pathway with the knowledge of spiritualism and astrology.  He described the aims of the organization to the people there.  He also described the need of spiritualism in life through the interview on the radio channel in Sydney, Australia.  After the broadcasting of interview on radio he was contacted by several people who were benefited in many ways.  During his stay in Sydney, he was invited for preaching the people on spiritualism, astrology and HEALING ART OF HOMOEOPATHY.

Dr. Nath even organized the Gayatri Yagya and told the people about the benefits of the yagya and gayatri upasana.  Dr. Himanshu Kaushik who is the President of International Branch of Vishva Hindu Parishad also came to listen to preaches and appreciated him for his knowledge and work towards the humanity.

I have more than 21 years of experience as a medical officer. I have not been given any adverse remarks during my service. I have done various duties as a Doctor, as coordinator, in administration, as a teacher, as counselor, as a guide to the store in charge, lab technician, Pharmacist, PHN, ANM, Dresser etc. From the beginning of my carrier I have been working for the promotion of Health through integrated system to provide holistic Health to the patients.

Time to time I had organized various mega Holistic Health Camps in my District NE under the chairmanship of District Commissioner. Here I had appreciated and being given appreciating award through CDMO as and when required by my senior officials like DHS, addl. Secretary Health & principal secretary Health. I have submitted various planning proposal-

D.Health Exhibitions-Health exhibitions conducted during fairs For promotion of Holistic Health through chart and display and interactions with the patients.